This article will explain the identity of the main character of Jujutsu Kaisen, Yuji Itadori, from the perspective of Noritoshi Kamo’s cursed corpse, the heavenly binding curse, and the mystery of his parents.

Right from the start of the story, Yuji Itadori was found to be a ‘Sukuna’s vessel’ when he ate the finger of Ryomen-Sukuna, and after that, his life has been full of vicissitudes, with secret executions and real deaths.

However, as the story progresses, the foreshadowing from earlier in the book and the identity of Yuji only deepens the mystery.

We start by looking at his relationship with Noritoshi Kamo(= Kenjaku), who is said to be the worst sorcerer in history.

What you can learn from this article

[Jujutsu Kaisen] What is the true identity of Yuji Itadori? Is he Kamo Noritoshi’s cursed corpse?

The parents of Yuji Itadori are only mentioned by his grandfather in the first chapter of the first volume, and are never mentioned in the manga.

So, first of all, let’s assume that Yuji Itadori himself is not a human being but a cursed corpse.

In the 134th chapter of Jujutsu Kaisen, Kenjaku looks at Yuji Itadori and says

Considering this word, it makes us feel as if Kenjaku created Yuji Itadori as a Sukuna’s vessel.

Kenjaku has been taking over Suguru Geto’s body, and although his true identity is not clear, he has taken over the bodies of various people besides Geto.

In chapter 143, it is shown that the mother of Yuji Itadori has also been taken over, so Yuji Itadori is also a being created by Kenjaku.

Is Yuji Itadori a cursed corpse created for Sukuna’s vessel?

If Yuji Itadori was created by Kenjaku, I wonder if he is human or not.

By the way, Kenjaku’s work is mentioned in chapter 60 of volume 7 of the manga.

He was a sorcerer at the beginning of the Meiji era.

He took a human experimentation to a woman who had the peculiar constitution of “conceiving the child of a curse”, and created a special cursed charm called “Kusozu cursed wombs“.

Perhaps, like “Kusozu cursed wombs“, Yuji Itadori is created by an experiment. 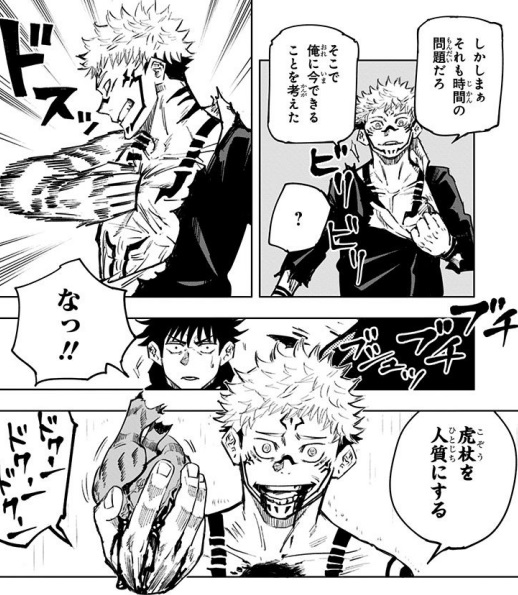 However, as you can see in the description of Sukuna taking out his heart in the 8th chapter of volume 2 of the manga, Yuji Itadori’s body is apparently a human one.

Also, from chapter 143, we know that Yuji had a father, Jin Itadori, and a mother who was taken over by Kenjaku.

So, it seems that the body of Yuji is not a “cursed corpse”, but it may be different from that of a normal human being.

[Jujutsu Kaisen] Is the true identity of Yuji Itadori the heaven’s binding curse?

Next, let’s talk about the possibility that Yuji Itadori was born as a normal human being.

He has memories of primary schools and junior high school, and even took a picture with his junior high school classmate Yuko Ozawa at their graduation ceremony, so at the very least he is not a recent creation.

However, Yuji does have a number of characteristics that make him more than just a human being, and we will explain these as well.

No technique is engraved on his body.

In the 12th chapter of the second volume of the manga, Satoru Gojo makes it clear that there is no technique engraved on Yuji Itadori’s body.

However, this is quite natural in a non-shaman family, and if Yuji is human, he was born into a perfectly normal family.

However, as you will see below, Yuji has superhuman specs and abilities.

Yuji’s physical ability and endurance are beyond the human level.

The physical ability of Yuji Itadori is of an inhuman level, and we have seen glimpses of it from the first episode of the first volume of the manga.

The world record for the cannonball throw is 23.12 metres, but Yuji Itadori throws the cannonball horizontally across the ground in a baseball-like manner, sending it crashing into a football goal over 30 metres away.

If he had thrown the cannonball the way it is supposed to be thrown, he would have set a more surprising record.

In addition to this, his classmates gossip that he can run 50 metres in 3 seconds.
(Even Usain Bolt in his prime ran it in about 5.5 seconds)

Yuji is not only physically strong, but his endurance is also extraordinary.

He has been injured in many battles with the curses, but never fatally, and he didn’t even lose consciousness after being smashed in the face by Aoi Todo.

He is Sukuna’s vessel.

Yuji Itadori is Sukuna’s vessel, so even he absorbs Sukuna’s finger, he doesn’t die instantly.

And even he controls it completely.

Sukuna has changed himself into the form of 20 fingers, and is treated as a special grade cursed charm.

Over the last 1000 years, no ‘vessel’ has been born that can take in and endure Sukuna, but Yuji is the first ‘vessel’ in history to be able to take in the Tsuina’s fingers.

However, if you take in a lot of Sukuna’s fingers at once, it will temporarily bring Sukuna out into the open, and Yuji will not be able to control it for a while.

He is resistant to poison.

In the manga volume 7, chapter 61, Yuji Itadori’s resistance to poison is explained.

As it is the vessel that can take in the Ryomen-Sukuna, which is itself a deadly poison, it is resistant to all kinds of poisons.

Therefore, the strategy of “driving poison into the Yuji’s body and hiding” will not work.

With its unbelievable durability and no effect of poison, it’s really hard to beat.

The same type of heaven’s binding curse as Maki Zen’in? 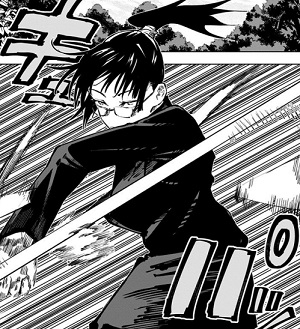 So far, we have talked about the inhuman characteristics of Yuji Itadori.

As I mentioned at the beginning of this article, Yuji’s body is not inscribed with any techniques, and it is possible that he is “heaven’s binding curse“, which means that his physical abilities and endurance are compensated for.

This is similar to the case of Maki Zen’in and Toji Fushiguro, who were born without the magic power they were supposed to have, but instead have extraordinary physical abilities.

[Jujutsu Kaisen] Is the true identity of Yuji Itadori’s parents the descendants of Sukuna?

Besides this, there is also the possibility of ‘Sukuna’s descendant‘ theory, as Yuji Itadori is a ‘vessel’ of Sukuna.

First of all, let’s have a closer look at the information about Yuji’s parents.

Yuji Itadori’s parents are rarely mentioned, or even talked about or rumoured to be mentioned.

In the first chapter of the 1st volume of the manga, Yuji’s grandfather tries to tell him about Yuji Itadori’s parents, but Yuji himself is not interested in hearing about them at all.

I’m not sure what my grandfather was trying to say here, but the fact that he went to the trouble of saying it at the end of his life suggests that it was something related to shaman.

If any of the above theories were correct, would you have tried to say something like this?

Does Gojo know everything?

If Yuji Itadori’s family lineage was related to a shaman, much less a descendant of the Ryomen Sukuna, Satoru Goyo would have known all about it.

Because, in the last chapter of Jujutsu Kaisen vol.0, Gojo was investigating the family lineage of Yuta Okkotsu and Rika Orimoto.

So he must have done a thorough investigation of Yuji’s family history, and he probably knows about his parents.

It’s hard to read Gojo’s true intentions because he’s always so aloof, but he may actually be holding a huge secret about Yuji.

In this article, we have explained the identity of the main character of Jujutsu Kaisen, Yuji Itadori, from the point of view of Kenjaku’s cursed corpse, heave’s binding curse, and the mystery of his parents.

As the protagonist of Jujutsu Kaisen is the most mysterious person in the story, a lot of foreshadowing is prepared from the beginning of the story.

As the story progresses, more and more of the mystery of Yuji is revealed, and this is an element that we can look forward to in the future.

[Jujutsu Kaisen] Yuji Itadori is cool! Spoilers for the each scene of story!

In this article, we will introduce you to the cool quotes and famous scenes of the main character of Jujutsu Kaisen, Yuj...

[Jujutsu Kaisen] The death of Yuji itadori! What are the conditions for resurrection and coming back to life?

This article explains the death of the main character of Jujutsu Kaisen, Yuji Itadori, the conditions under which he is resurrected, the circumstances behind his death in the first place, and the scene in which he dies again in the battle with Yuta Okkotsu.

[Jujutsu Kaisen] Choso and Yuji Itadori are brothers? The relationship between Noritoshi Kamo and his non-existent memory!

In this article, I will explain about the relationship between Yuji Itadori and Ryomen-Sukina of Jujutsu Kaisen, also th...
[Jujutsu Kaisen] Aoi Todo’s Quotes! The coolest and funniest character!
[Jujutsu Kaisen] Momo Nishimiya is cute! What’s her age and height?

Thank you for visiting.

You enjoy the a number of contents about Tokyo revengers here.

Thank you for visiting.

You enjoy the a number of contents about Tokyo revengers here.